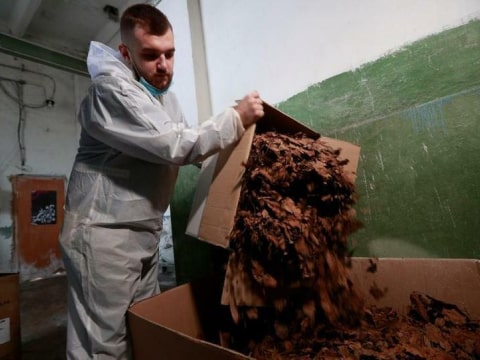 ZHYTOMYR, Ukraine (Reuters) - Valentyn Frechka was a high school student living in rural Ukraine when he began a science project to turn fallen leaves from trees and plants into paper.
Three years on, and the 19-year-old is heading an initiative called “Releaf Paper”, producing paper bags and packaging from fibre extracted from dead leaves.

The project, based in the city of Zhytomyr, 140 km (87 miles) west of the capital Kyiv, aims to reduce the environmental impact of paper production. It has partnered a cardboard manufacturer in the city that hired Frechka as a research and development specialist in 2018.

“The idea is very simple. Things which are believed to be waste can be re-used or recycled. Leaves are waste that need to be removed from parks because they emit a lot of carbon as they rot,” Frechka told Reuters.
“It is an opportunity for a customer to use environmentally-friendly packaging.”

In October, Releaf Paper produced its first batch of solid paper, made from leaves collected in large bags in Kyiv and other cities. It is planning to go into commercial production.

In 2020, Forbes magazine in Ukraine included Frechka on its list of the 30 most successful Ukrainians under 30 years old.